It’s always a tough question. When can you exercise the “moving mountains faith”? Usually we just pray for the will of God and ask for strength to accept it. I’ve always struggled with the line in the sand. When can we be like Jacob when he wrestled with God and said “I will not let you go until you bless me”? When can we be like Gideon and need reassurance for what he’s told us? Sheesh, he asked twice for God to show him he was there and God did it…twice! Peter walked on water. Elijah called down fire!  Did God tell him to do that or did he just know God’s character enough that he knew God would show up? Do we have to ask to have great faith? Do we have to pray for the will of God to include great faith?

So we wrestled with God, we walked on water, we had a mustard seed of faith. We prayed God would take the cancer out of the removed tumor. It couldn’t get any crazier than that. The doctors, nurses and well, science told us that. We went for days praying and rejoicing for what God was going to do. I would like to say that this is where our story got an explosive result and no cancer was found. It’s not. God did answer our prayers. His answer was no.
Our doctor called on a Wednesday night and told us the biopsy had come back positive (again) for Alveolar Rhabdomyosarcoma. The numbedness was spreading. As if that wasn’t enough to turn our stomachs we were told that the margins weren’t good. She would have to do radiation. A lower dose because the tumor was removed but she still had to do it. Once again we received the news when we were in the car. We just sat there. Completely heartbroken and infuriatingly confused.
That night was the hardest for us. Rock bottom. We had seen Lane go through all of this. We had prayed for an end and believed it. I felt so panicked. This was happening. Nothing in the way of stopping this now. I was drowning in fear and anger.
“God what happened?”, I cried.
I’m still here.
“We believed, we hoped, we trusted YOU”
I’m still here.
No matter what I unleashed at God that day. That still small voice surrounded me.
“Ok, You’re still here? A lot of good that does us, right God?” Lane will have to go through ALL of it…I thought a mustard seed of faith would save her. I believed it would spare her.
I felt his voice in my bones, I felt it in my anger and I surely felt it in my hurt. As Greg and I collected ourselves to deal with this he told me that he felt God asking him “Do you still trust me?”
We had to talk with the doctor face to face. We needed to hear it from her.
So, that morning the doctor told us, again, what the tests said and what we needed to do.
“So what if we decide not to do this?” What if we take her out of here and do natural remedies?” I asked with anger and desperation.
Her answer was short, “She will die.” “Her cancer will spread and in 6 months it will be everywhere.”
Reality.I was reeling from that stark reply. This is reality.
They wanted to set up the port surgery for Friday(the next day). “No way, we have a party for Lane on Friday.”  We promised her a “stiches out” party after her first surgery. We have friends and family coming in to celebrate with her. This may be reality but there was no way that she wasn’t going to have her party on Friday. This much I could control! She deserved one more weekend of fun before her 42 weeks of treatment. So we made plans to call next week to schedule the port and went home, numb.

We had a party to get ready for. Greg blew up the balloons and hung the streamers. Rob(Greg’s dad) made the cake, our neighbors(Bill, Brandi, Sydney and Logan) brought over a piñata and fun ensued. 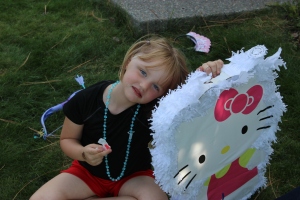 I don’t know. I’m sure there are great philosophical debates on all of these things. I’m sure I could have read more books or asked more opinions but I really wanted to hear from God. Just from God. It wasn’t the answer we prayed for but we did hear from God. That still small voice…I’m still here. He’s been here from the beginning, leading us to a place that we have no choice but to depend soley on Him. This is a journey that we have to take, that Lane has to take. We’ve found ourselves in a completely vulnerable position in many ways. However we’ve never once needed for anything. We’ve had several obstacles since this started and God’s taken care of all of them. His people have been a supernatural blessing to us. In all of this hurt God had us! Yes, God has been taking care of us. I believe that God’s heart was broken for us that day. I know he hurts for us that we are sometimes limited by our story and unable to see his grand picture.

But today I know this…

He’s working in this broken world. In this world that fosters illness, decay and tragedy. God has been in the midst of my family, He’s still here!

4 thoughts on “He answers prayer.”