How did we get here?

A moment of powerful dreariness comes over me and in a flash. I feel the last few months in one deep breath.

This sleeper chair is so big and awkward it’s hard to get close to her bed. There are jewelry beads and throw up bags inches apart.Her hair is gone. Again. 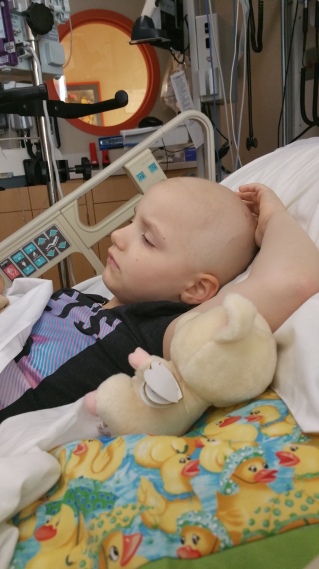 The moment we saw that bump…yes,bumps. You know, that word has changed all meaning for us. The word sends us jilts of hot fear and anything resembling a bump has our full attention.

That night I knew. I knew what it was. I knew it was back.

We saw that bump ten minutes before bible study on a Monday night and haven’t stopped scrapping and fighting for hope,direction,peace…healing.

Fumbling over our first few weeks of Lanes recurrence we kept all of our options open. We had already done 2 surgeries, 42 weeks of chemotherapy and over 4 weeks of radiation and her cancer came back in about six months. Insult to injury was the fact that they had missed the growth on the previous scans.

Navigating the emotions of asking Lane to return to a battle that shows no mercy to children was…is…awful.

We needed a miracle.

Sitting in our room at the Ronald McDonald house in Phoenix, Arizona we made our final decision. The door had finally opened…the cure was ours.Twenty-Four hours later we were in Monterrey Mexico. We would be leaving here with a cancer free child.

The connection with Ray seemed providential and unexpected. Greg met him through a sales call at work.  He personally knew of a stem cell researcher who was doing some incredible things with cancer patients. So much so that he had developed his own formula and stem cell technology to eradicate disease.

Ray shortly became a link to our best hope. He would call,text and email Greg constantly.
As newly minted ‘Truth About Cancer’ believers we were cautiously optimistic about this new information we were holding. Was it possible that a cure was out there? Ray anxiously vouched for this treatment and lavished words of praise onto this doctor.Every phone call brought more hope. Every text solidified our decision. Especially since they were paying…

Our motto was always to keep moving forward. It finally seemed like the money would be in any day but…the bumps. The bumps were back. We were seven weeks post surgery and we could see something brewing.  We thought by changing her diet,consuming and applying essential oils and taking an array of supplements that the beast would relent.

We had run out of time.

In Phoenix we learned that indeed her tumors where already growing back. We had reached the end of our tether. We were at the edge of sanity and emotionally holding on by fingertips.Day 4 of radiation we were told that she probably would have permanent hair loss and would lose her hearing.

I could no longer control myself. My sobs were more than my husband could bare and we leaped over the edge together. 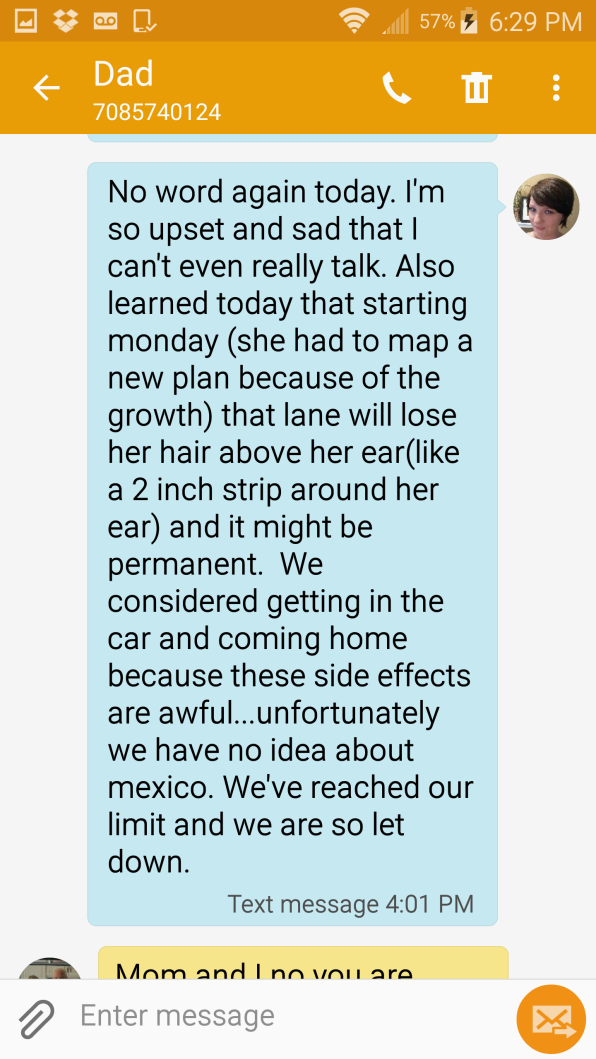 Every decision we made was agonized over,prayed over and discussed in length.
If there was a cure…
If there was a way…
Our door would open in a way we didn’t expect.

-Dr. Alfredo Juan Estrada Cadena-
As Dr. Estrada explains, his delivery method is correcting many known ailments with patent-pending treatment, that is “repatterning DNA” to lock in the STEM CELL TRANSPLANT, for immediate results often in 30 minutes or less.

We had abandoned our treatment in complete hope for a miracle.
We were all fighting for the very breath of this child.
My family had opened the door…we no longer had to wait for the funds to arrive.
My father took out a line of credit on his paid off house.
My brothers and sister took money from their businesses/savings/stocks.
The next morning we were sitting in a hotel in Monterrey, Mexico having breakfast with the man that would save our daughters life.
$24,000 of the $60,000 had been wired to him that day.

This doctor would reprogram the DNA of the tumor and correct it. He would take her stem cells and reproduce them, correct them and replace them. Followed by his patented M-174 (As Dr. Estrada explains, “M-174 targets cancer cells that “over express,” or make too much of a protein called HER–2 or erb B2, which is found on the surface of some cancer cells. M-174 attaches to the HER–2 positive cancer cells and slows or stops the growth of the cells. M-174 is used for cancers that are HER–2 positive. HER–2 positive cancers over expresses the HER–2 protein or has amplification (too many copies) of the HER–2 gene. In layman’s terms medical doctors now have a means to instruct aggressive cancer cells to become dormant cancer cells with an inability to feed and grow.”

The handwriting was creeping up the wall the moment we met him. We walked on eggshells and tried to reason with his unreasonable requests.
We lowered our bar to “Mad Genius” all in hopes of receiving the treatment we had been promised. After all he had looked my girl in the face and told her she would leave cancer free. He told her no more neuropathy and no more doctors.

He promised her a cure.

Hindsight is 20/20 and now I understand you work in shock and awe. Your robust precision in manipulation is astounding. You had us. Hook, line and sinker. Did you think we would not ask questions? Is this why your anger would accompany you into the room and yell at us for talking with the nurses. You do not know our fierce love and dedication for the whole healing of our girl? That we would carry this lie and mask our doubt with deceit? I was with my girl every moment of every day. I was up every time a nurse entered the room taking note of every medicine she received.
No one wanted this to be more miraculous then us!
You took the cultural barriers and used it to your advantage. You hoodwinked all of us.
I’m guessing your plan started to fall apart when an actual pediatric oncologist got involved. Were you surprised he spoke english? I’m guessing by how you continually dodged him the answer would be a yes. Remember when you rushed us out of our room to tell us the tumors were centimeters from her brain? That we must do treatment or she might not make it home alive? We only put it together later that little show was because the other doctors hadn’t assembled yet…that and the fact that it was a lie. We saw the CT, well, after we cried our eyes out for a few days.  Of course, if we would have went home then how in the world would you have kept the money? Thank goodness for that curve ball oncologist…the one that specifically said that we received no medicines that didn’t come directly from the pharmacy. His exact words were “nothing was cooked in a lab”. How do you reconcile this?

Remember the speech about how you were for us…The oncologist said we needed a primary care doctor to watch over Lane after her treatment. You said you would find a great doctor in Spokane. We were so excited that you found someone that was on board! Remember, how she was excited to see us and be a part of this awesome treatment?

I won’t forget the look on Greg’s face when he called her office later that afternoon and he mouthed  the words “never heard of him”.

We specifically agreed to get chemo in Mexico because you said you would follow it up every day with your treatment. Your treatment would make her strong and recover and more specifically do what chemo couldn’t and fix the cancers DNA.
-The first night it was the wrong temperature.
-The second night someone mixed it wrong.
-The third night the chemo ran too long.
Calling and texting us to stop asking questions was not a good move on your part. Making fake letters from the hospital to intimidate us into being quiet…also not a great move. Especially since Greg took a picture of the letter before you ripped it up.
The administration of the hospital was not too happy with your con. I suspect that’s why we never saw you again.
So all in all we received one treatment of your suggestion. This treatment consisted of plasma from the pharmacy and Flebogamma…also from the pharmacy.

We called you. We asked if we were receiving your special treatment. You said yes, that today was the day that she was getting her M-174. Did you know we took pictures of everything she received? Did you know we looked everything up and documented all of it?
Also, Cambridge has never had a student registered under your name. I can’t find your name on any Nobel Prize website of nominations or winners. Oh, and the US Embassy has all of your information.

You are a fraud. You don’t deserve to be in any picture with my girl.
However, this picture will be used as a beacon of warning to anyone lured by your illusion.
We will continue our story and run our race. You have not stolen our spirit but embolden us to truth. We win.

When trying to follow the Lord we look for doors, right? Doors that open and close…if not a door a window? If the doors are closed then wait in the hallway, right? We perceive open doors as bright and shining conclusions.

I am confident in one thing. We followed the Lord and He did direct this path. Our door was open but it was a hard, dark path. None the less the right one. I don’t understand but my faith can’t be contingent on my understanding. Just like the Lord’s plans aren’t contingent on my degree of faith…He loves me in my pain and doubt.He’s still moving even though I am standing still. 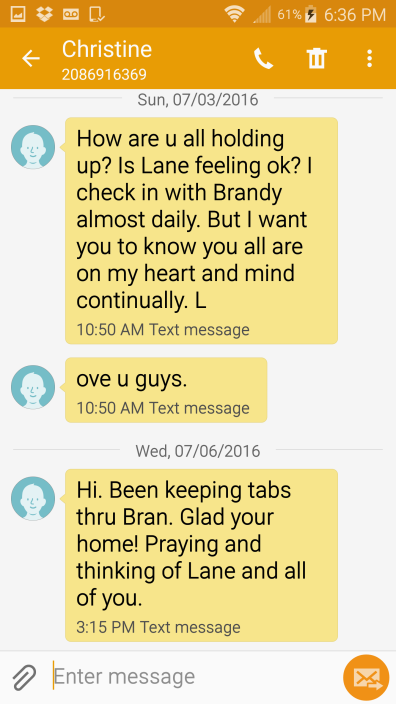 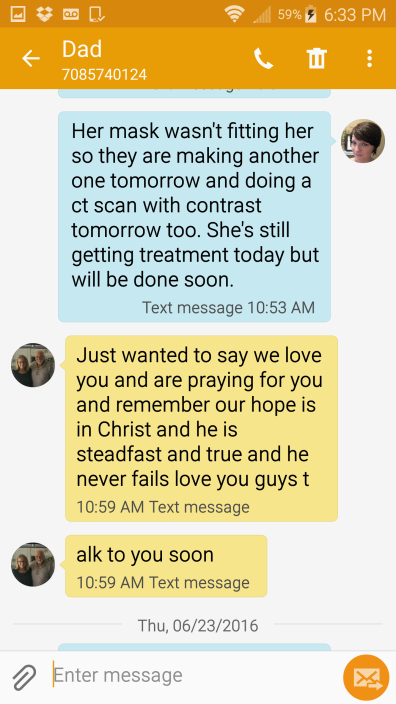 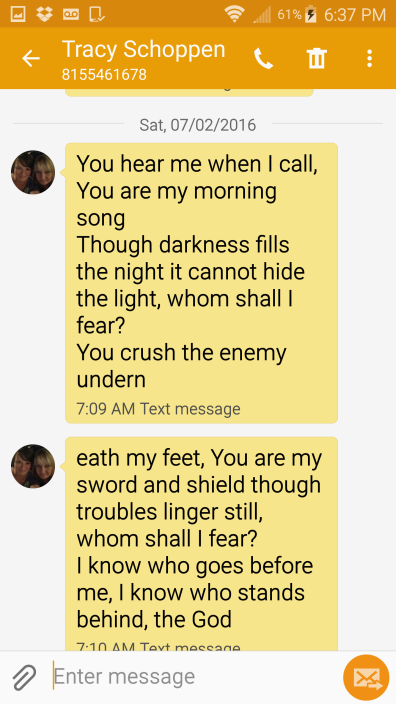 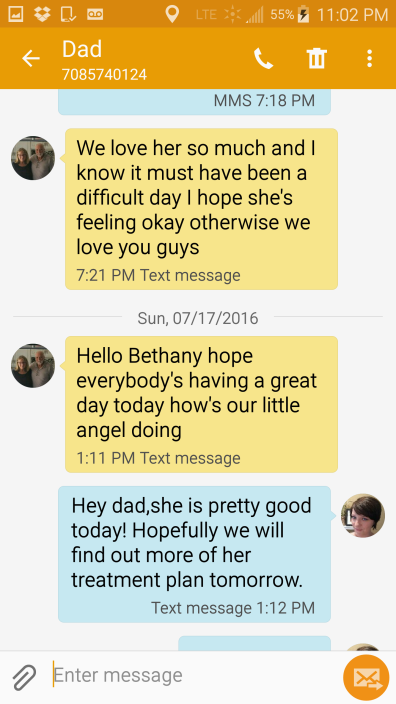 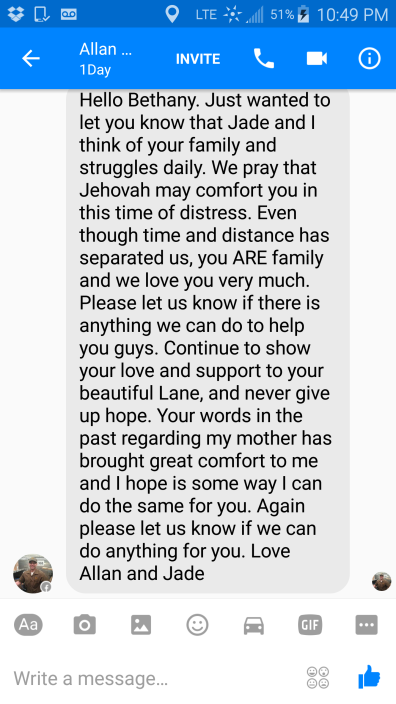 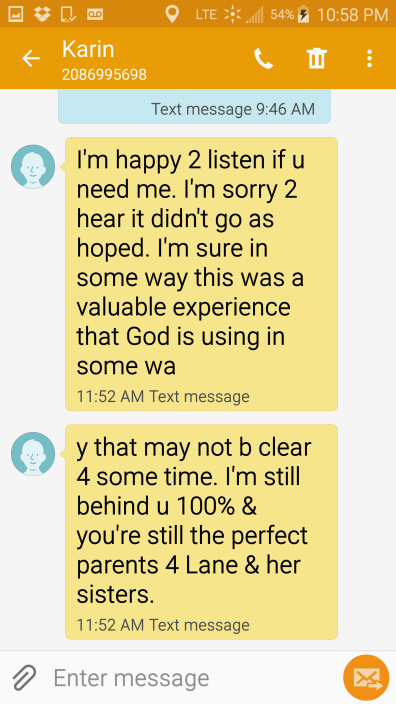 Thank you for all of the text,emails and phone calls of love. Thank you to Brandy and Bill Ellis for watching our children for three entire weeks and as we continue further treatment. You are amazing.
Thank you to my family…words aren’t enough.
Thank you to my friends who’ve sent sweet gifts and cheerful messages.

Thank you Lane for your resilience and strength.

Let’s do this one more time baby.